Sometimes I post in-depth articles on a certain aspect about domestic abuse.
Today I want to give a general overview of 31 things Christians need to know about domestic violence.
Each of these points deserves elaboration, which I will not do for sake of brevity. However, I hope they will spur your thinking and motivate you to learn more about this hidden evil that affects so many people within the body of Christ. 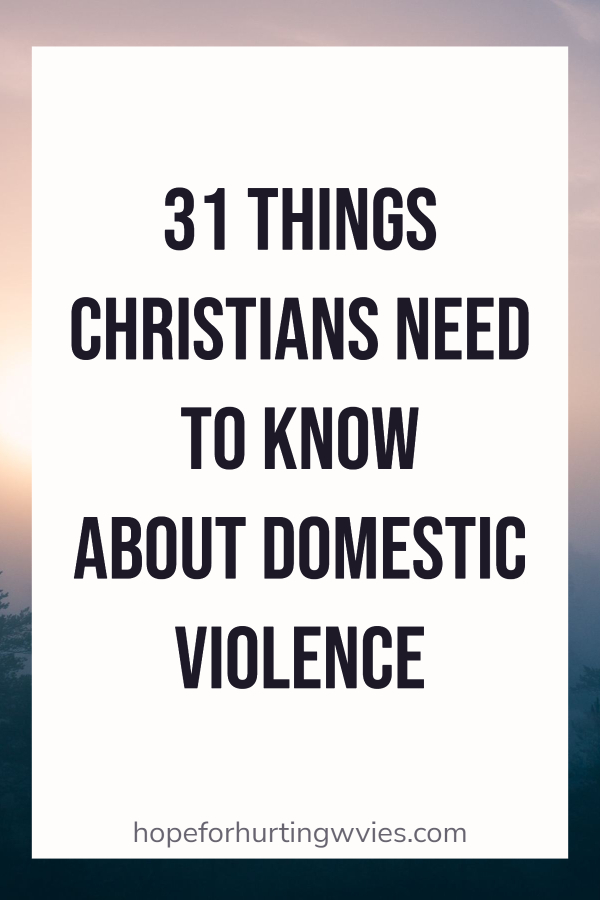 1. Domestic violence takes place among families in *your* church, whether you believe it does or not.

3. Abuse takes place in all types of homes. It affects people of every financial status, ethnicity, belief system, and educational level.

4. Domestic violence encompasses far more than physical violence, which is why I generally refer to it as domestic abuse, and will switch over to that term at this point.

5. Domestic abuse is not about specific incidents where the abusive partner lashes out in a rage. It’s about a pattern of coercive control that permeates the victim’s entire life.

7. Domestic abuse doesn’t always look like abuse on the surface. (Example: “So he doesn’t like you to wear that outfit. Big deal. That’s not abuse.”)

11. Many wonder why a victim would not simply refuse to play the game, especially if the consequences are not severe. They believe that the abuse would stop if she would only stand up for herself. The answer lies in the mindset of the abuser. When an abuser believes he is entitled to what he wants, and that he can punish his partner in some way when she does not provide what he wants, this reveals the heart of who he is. If the victim refuses to concede to his whims while the punishment is less severe, he will simply increase the consequences until he gets what he wants.

12. Many believe a victim is weak when she goes along with whatever the abuser wants, without protest. In reality, she’s probably just smart (see #11.)

13. Emotional abuse is physical abuse. There are proven negative health effects that occur as a result of emotional distress, often extremely severe ones.

14. Even if emotional abuse doesn’t affect the physical body, who cares? Isn’t a person’s whole being (body, soul, and spirit) valuable and worth protecting?

16. Abusers are manipulative and deceptive, and they’re pretty proud of themselves that they’re manipulating and deceiving YOU.

17. If you observe an abusive incident or if a victim discloses their partner’s abusive behaviors to you, you are only hearing or seeing a fraction of everything that goes on behind closed doors.

18. Abusers don’t need you to counsel them to help them understand what they’re doing wrong. They know.

19. Abuse is not a marriage problem. Abuse is an abuser problem. Victims need safety, not someone trying to keep the marriage together.

20. There is no such thing as remaining neutral when abuse is involved. You cannot keep a victim safe while simultaneously taking their abuser under your wing.

21. Divorce for selfish reasons (want to trade in for a newer model) was taking place in Jesus’ day. This is what he condemned. Divorce for protection from a neglectful, harmful, or unfaithful spouse is not condemned in scripture. It was literally the reason God designed it.

22. Wives of pastors, missionaries, and other ministry leaders are often victims of abuse, and they face additional obstacles in disclosing abuse that lay church members do not.

23. Abuse victims don’t need you to talk to them. They need you to listen to them, believe them, and support them in practical ways.

24. When an abuser realizes his victim is ready to start telling the truth about what’s going on at home, he’ll do his best to get ahead of the game by telling people she’s been struggling with mental illness or asking people for prayer because he’s noticed she is spiritually struggling. Don’t fall for the manipulation.

25. Most victims believe that the abuse is their fault. The abuser uses confusing language to defend all of his inappropriate behaviors and the victim has no choice but to conclude she’s overreacting and that he’s only angry because she’s being difficult.

26. Telling a victim to read a book about communication or about being a good wife only reinforces the idea that she can somehow make the abuse stop if she tries harder. But you can’t make an abuser stop abusing by preaching to the victim. Focus on the victim’s safety, not on trying to figure out how she can make the abuse stop. (She can’t.)

27. Some churches do a good job of believing the victim and of prioritizing her safety. (Yay!) Once the victim’s situation has stabilized, you may feel it is time to turn your attention to holding the abuser accountable. But beware that you do not fall prey to the abuser’s continued manipulation.

28. The statistics of an abuser truly changing his ways are extremely slim. God can transform a person, certainly, but they must choose to submit themselves to that transformation, and that is the exception and not the rule.

29. What most abusers WILL do, however, is to feign repentance in order to have their prey restored to their possession. Do not be so hopeful about restoring a marriage that you fail to care properly for the souls of the people involved. Ensuring the victim’s physical and emotional safety for the long haul and interacting with the abuser in light of the truth as it is, and not as you’d like it to be, is far better for the well-being of their souls.

30. It is far better to care for the souls of people than to worship the sacred cow of “intact marriages.”

31. The beauty and importance of marriage lies in its picture of Christ and his church. To insist on preserving a marriage when it is hideously antithetical to that picture is nonsensical.