A while back, Focus on the Family shared a series of articles on their Facebook page regarding how wives can meet their husband’s sexual needs. Focus on the Family is an organization that many people look to for what they believe is good, Biblical advice about marriage and family. The problem, though, is that much of the advice is a dream come true for an abusive husband! The material gives a pass to the abuser and places expectations on the victim that she should not be responsible for.

It’s so important for women to understand that their husbands are not animals and shouldn’t be excused when they act like one. Wives are not meant to be their husband’s sex slaves. Sex is intended to be about intimacy, not simply intercourse. You are under no obligation to use your body as a receptacle for your husband to use. 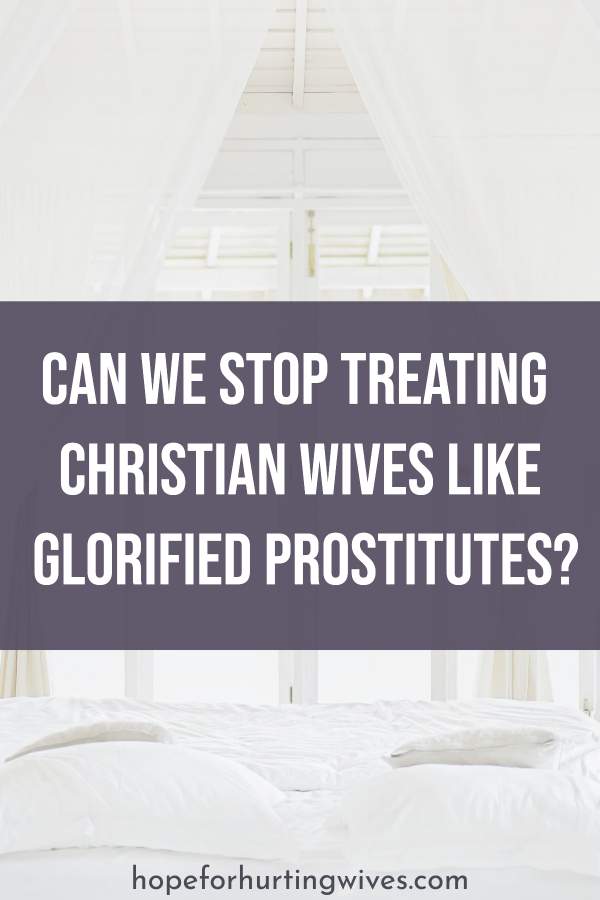 To help you understand some of the harmful and unbiblical ideas that circulate in much of the content that is written to Christian wives, I’ve taken some of the quotes from the aforementioned series and put them side-by-side with my notes about them.

In the first article of the series, “Understanding Your Husband’s Sexual Needs”, the author lays the foundation of the series. The idea is to help wives understand how powerful their husband’s sex drive is so that they will  be willing to accept the rest of the series when they are told they need to give their husband lots of sex.

Here are a couple quotes that give you an idea of how the author tries to prove this point.

It is interesting that the author tries to prove that all men are basically uncontrollable when it comes to their sexuality and are all-consumed by it. They used Bible characters who raped women and visited prostitutes to try to help women understand how powerful a man’s sex drive is, yet failed to mention what the rest of the Bible says about sexuality. For example:

Here are some thoughts that come to my mind whenever I see someone trying to emphasize how much men need sex.

1. Instead of telling wives that their husband’s sex drive is so powerful that she needs to have lots of sex so that he can keep it under control, why don’t Christian authors and speakers remind men and women that they are new creations, dead to sin, and empowered by the Holy Spirit to live holy and pure lives?

2. Why is it that only men are made out to have such powerful, all-consuming sex drives? If someone uses Bible characters who didn’t control their lusts as proof that that this is true, why don’t they ever use female Bible characters to explain to husbands how powerful a woman’s sex drive is, for example Potiphar’s wife, Delilah, or the strange women in Proverbs?)

3. What about single men, men whose wives have died, or deployed soldiers? If they don’t have a wife available as an outlet for this supposedly all-consuming sexual desire, how can they possibly control it? They can control themselves through the power of the indwelling spirit, and so can any man. Wives, you weren’t created as the gatekeeper for your husband’s sexual purity. If the Holy Spirit is not powerful enough to keep your husband from indulging the lusts of the flesh, neither are you.

In the second article, “Understanding His Sexuality,” the author of the series seems like she is going to change the direction of how these conversations typically go. It appears she is going to say something different than the typical, “Your husband needs sex, so give it up.”

This type of mixed messaging is part of what makes many Christian messages so dangerous. Part of it sounds right, which makes it more confusing to discern the parts that are so very wrong. The author sounds like she cares about how a wife feels and that she doesn’t want a woman to have sex with her husband out of guilt or oblication. But as you read more, you find that it totally contradicts those concepts.

Let’s continue with some quotes from  “So What’s the Holdup?”, the next article in the series.

Do you see how there are more mixed messages here? (Very mixed!) The author is trying to emphasize the importance of intimacy and oneness rather than a commitment to a prescribed quantity of sexual encounters between a couple. But the author also ignores a woman’s need to feel safe in her relationship. Without safety, there can be no intimacy. When a wife does not feel safe in her relationship, no one should be encouraging her to cultivate her sexual relationship with her husband. Instead, the reasons she does not feel safe need to be explored. Is she experiencing coercive control?

Now let’s continue the series with quotes from the article entitled “Your Husband’s Sex Drive is God’s Gift to You.”

If it was unclear before, the author has now made it plain that the case she was building is that sex is the greatest gift a wife can give her husband. (As I mentioned above, why aren’t there any articles that try to prove a woman’s all-consuming sex drive and that husbands need to give this gift to their wife?)

But not only does the author say that sex is the greatest gift a wife can give her husband, she also tries to make the case that the husband’s powerful sex drive is a gift to the wife. And just how is it that it is a gift to the wife? Because she can use the influence of sex to entice him to be more godly!

My friend, that is so very twisted! Wives who are desperate for change in their marriage (because they feel unsafe in their relationship, as the author already wrote) can supposedly just have more sex with their husband and it will make him want to change!

Wives are reduced to playing the whore, selling their bodies in exchange for basic kindness from their husband, and are being told that this is the way God designed things — that it’s a gift from God!

I just want to weep! Why?! Why are women being degraded this way, and in the name of God?!

Do you see more of how this mixed messaging is so dangerous? Authors and speakers claim they don’t believe wives should have sex with their husband out of obligation.
Yet when they do not feel safe with their husband, or when their husband does not fulfill basic household responsibilities or communicate or work toward resolving conflict, wives are encouraged to use their bodies to get their needs met.
In the article, the author says, “Please understand – I am not suggesting you use sexuality to manipulate your husband!”
Yet, she states that a woman can improve her marriage by increasing her sex appeal and teaches women that they can help their husbands be the right kind of man by using sex.

Giving disclaimers and caveats makes no sense when everything else that is written illustrates the opposite of what the disclaimers say.

Search the scriptures. If something you’re being taught doesn’t seem right, that’s because it probably isn’t. If something makes you feel unsafe or degraded, it is not of God. Jesus says to come to him and he will give you rest. He does not call you to bondage, he came to give you liberty. He says you are valuable to him. He does not want you to be treated like trash.

In this article, I’ve written a lot about what sex should not be in a Christian marriage. If you want to understand more about what a healthy, intimate sex life should be like, I highly recommend you get the book, The Great Sex Rescue.

*Final note: thankfully, the original author of this series has changed her views since she wrote it, and when she saw that Focus on the Family was continuing to share it, she requested that they remove it, which they did. Unfortunately, their organization and others like them continue to share other material that contains similar ideas. Until these very wrong ideas cease to circulate among Christian women, I will continue to speak out about them. No wife deserves to be treated like a prostitute. I imagine it grieves the heart of God to see women who have so much value to Him being treated as only being worth what their body can do for a selfish man.

Amy Carmichael, a missionary in India who discovered that little girls were being sold as sex slaves in the Hindu temple, wrote the following in a book entitled Things as They Are.

“It [the horrors that the little girls of India experience] cannot be written or published or read, but oh, it has to be lived! And what you may not even hear, must be endured by little girls.”

“If it is trying to think of it, and you would prefer to turn the page over, and get to something nicer to read, what must it be to live through it?”
“Oh, to care, and oh for power to make others care, not less but far, far more! Care till our eyes do fail with tears for the destruction of the daughters of our people!”

The Christian wives of whom I’m speaking in this article are no less valuable than the little girls in India.  My eyes do fill with tears for them. They are enduring sexual slavery under the misguided advice that they can entice a bad man to be good. I will continue to write about “things as they are” until others are persuaded to care enough to stop repeating the ideas that are keeping them enslaved.