Sometimes people show a lack of compassion toward abuse victims because “they should have seen the red flags.” I’ve been observing this on some social media posts recently. It’s almost a “Well you got what you deserved because you were too stupid to avoid it” attitude.

(First of all, do you realize how heartless that is? Is it really okay to downplay someone’s pain even if they should have seen the warning signs?)

But the reality is that it is most often the very best qualities in a person that cause them to miss or explain away red flags of abuse. And even if the victim has identified the abuse for what it is, many of those same qualities compel them to stay. 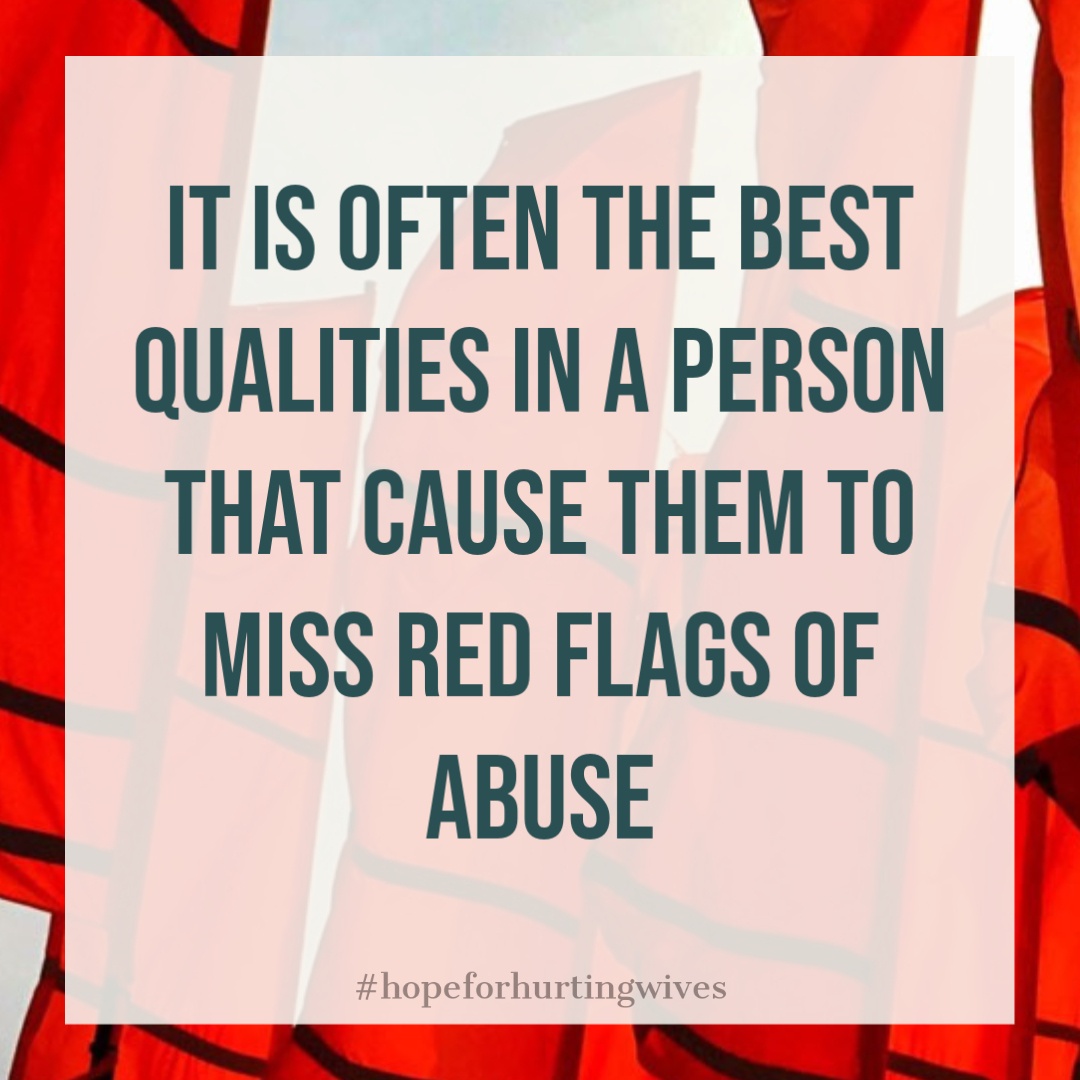 •They believe the best about others.
When they see what appears to be inappropriate behavior from the abuser, they give the benefit of the doubt. They don’t want to be quick to jump to unfair conclusions, so they determine they must have misunderstood. Abusers have good days, and those good days make it easy for a victim to confirm to herself that she was overreacting on the bad days.

•They are kind and compassionate.
Abusers use many different excuses for their abuse — childhood trauma, stress, addictions, and more.  The compassionate victim wants to be the one person in his life who doesn’t give up on him.
They don’t know that while his trauma, his stress, or his addictions might be real, they are not an excuse to hurt someone else. Abuse is a choice, but abusers are happy to appeal to the victim’s compassion. The victim is willing to experience personal pain in hopes that she can help the abuser recover from his own issues.

•They are quick to forgive.
When he says cruel words, but then apologizes in a flood of tears, they choose to believe his apology. “Love keeps no record of wrongs,” they think. It’s not until they’ve been trapped in the relationship for a very long time that they’ll be able to realize that his apologies have not amounted to changed behavior in the long-run. It takes a while to realize that this one wrong they “forgave and forgot” that one time and this one wrong that they “forgave and forgot” that other time are adding up to a reveal a pattern of abuse.

•They are responsible.
An abuser’s behavior is based on a belief system that he is entitled to being served. His motive behind the coercive control over his victim is to ensure that her life revolves around him. A woman* who is resourceful and responsible is an incredible asset to an abuser because it means she will be strong enough to carry the load of his responsibilities as well as her own. She will be able to keep the household running while he doesn’t have to lift a finger.

•They are tenacious.
A victim who doesn’t give up without a fight is an abuser’s dream. She will keep fighting for the relationship and keep trying to create a wholesome, peaceful atmosphere in the home. She will give 200% effort and refuse to back down. This tenacity will keep her in the relationship for a long time.

•They are humble.
Many victims know that they cannot make choices on behalf of a another person, so they focus on the person they can control — themselves. When conflict arises, it doesn’t necessarily occur to them that the conflict is actually the abuser’s tactics of coercive control. Instead, they look for ways to change themselves. They seek out ways to communicate better or to be less sensitive.

•They honor their word.
A victim considers the wedding vows she made to honor her husband “till death do us part.” She’s determined to keep the promises she made.

We must never look down on abuse victims as if it’s their fault for getting involved with an abuser.

We must place the responsibility where it belongs. It is the abuser who must be condemned for exploiting all the lovely qualities of his victim.