Do You Want to Be a Safe Person for Victims? You Must Develop This Skill.

Most people would say they absolutely stand against abuse of any type.

BUT…in all actuality I have seen victim after victim further traumatized by people who say they want to help.
Perhaps you are thinking, “Well I would never do that! I genuinely care about people and would do anything I can to help!”
Great! I am so glad to hear that! So I am going to share one big tip that will help you accomplish that effectively.

If you want to prove that you are a safe person you must develop the ability to listen without defensiveness.

When a survivor shares their story, whether in person or on social media, it’s so important to just be quiet and listen.
Sometimes this can be very hard. Your mind may immediately jump to things you believe to be true, and you may very well feel that these things discredit what the survivor is saying.

For example:
Survivor: “I am in the process of divorcing my husband because I was unsafe in my own home.”
Your mind: “But I know him! Perhaps he may have been unkind sometimes, but I know things couldn’t have been THAT bad! God says that a wife should win her husband without words, so the fact that she is divorcing him shows that she’s just not right with God.”

Survivor: “My husband did horrible things to me. I am severely traumatized because of his sin.”
Your mind: “She keeps talking about his sin. This just shows me that she’s got a victim mentality and is not willing to forgive.”

If you truly desire to help others, you will do that by not assuming they are angry and bitter for speaking about their experience.

Survivors are forced to convey some extremely harsh truths as they tell their stories. Perhaps these harsh truths include information about someone you have long respected and believed was a good person.

When your mind is presented with a possibility so contrary to what you have always believed, it will instinctively jump into defensive mode.
It’s not a fault on your part; it’s a natural physiological response. But a challenge to your beliefs feels like a personal attack, so you perceive the person speaking that challenging idea to be an enemy.
Your thinking becomes clouded when your alert system has perceived a threat, and because your brain interprets the person speaking uncomfortable words to be an enemy, you see the words, actions, and motivations of that “enemy” as hostile and belligerent.

But in reality harsh truths do not equal a harsh attitude.

Will you do for the victims what they’ve been expected to do for their abuser all these years, and what you want them to do for you: Will you, in love, believe the best about them?

It’s okay to feel uncomfortable with information that challenges your previously held beliefs. But it’s important to recognize that when you automatically feel defensive about certain ideas, that is not necessarily evidence that those ideas are wrong. It’s a natural response caused by cognitive dissonance.

The key to becoming a safe person is in what you do with that feeling of defensiveness.

Will you double down and become even more convinced that you are right? If you do this, you’ll inevitably decide that the victims don’t actually need your help, but instead need your spiritual advice on why they are not right with God. Now you have become part of the cycle of secondary abuse in which so many abuse victims find themselves! So many people say they hate abuse, but when they experience the defensiveness from feeling “attacked” by the victim who finds it necessary to speak such harsh truths, they fail to hold the abuser accountable and instead condemn the abused for saying things they don’t like to hear.

To be a safe person, be SWIFT to hear and SLOW to speak.

You cannot help a victim until you are ready to listen without the need to be right.

Who will stand with me in refusing to add spiritual abuse on top of the harm already caused to victims? 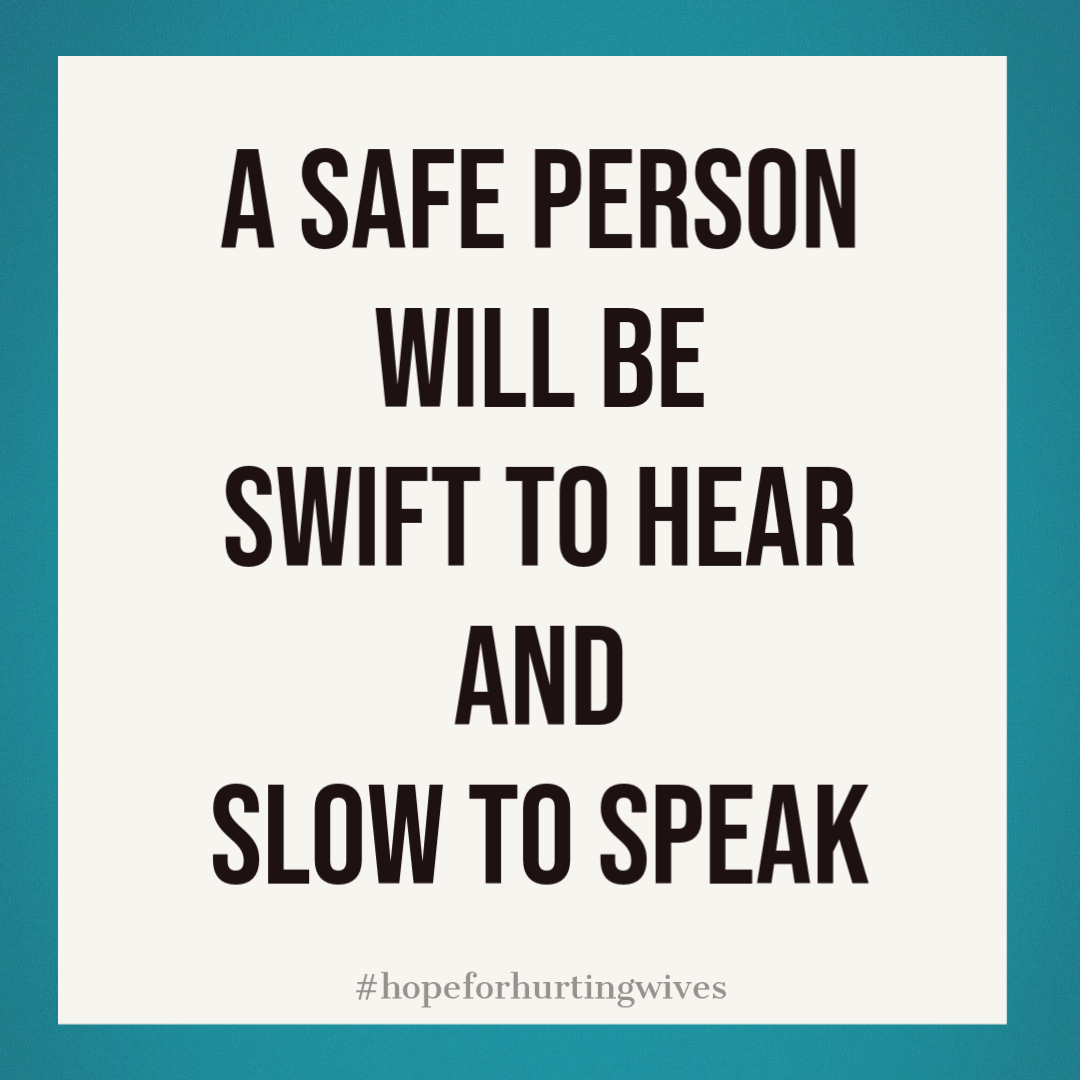 Do You Have a Financially Controlling Husband?

Why Most Christian Marriage Advice is Harmful to Abuse Victims